In Among Us by InnerSloth, space isn't the final frontier: betrayal is! In this exciting party game for 4 to 15 players, crewmates complete puzzles to keep their space station afloat, but watch out! One or more players are impostors trying to murder crewmates and undo their hard work. No matter which side you're on, Among Us is the perfect sci-fi mystery party game.

Most players in a game are crewmembers assigned to complete various tasks around a space station. You might upload vital data to supercomputers, maintain engines or destroy asteroids. Work together to keep from getting killed by an impostor!

As you go about your business, be sure to check security cameras for impostor activity. If you don't act fast enough, you could be the next victim!

At the beginning of a game, one or more players are randomly chosen to be saboteurs. These impostors work in the shadows to kill crewmates, undo the team's hard work and frame other crewmembers for their crimes. You can even fake doing tasks to blend in and create an alibi.

As an impostor, you can trap innocent crewmembers and sneak through vents to catch unobservant players by surprise. You'll sow confusion and chaos by sabotaging parts of the space station. When the crew catches on, convince your friends of your false innocence by framing someone else!

Get to the Bottom of a Thrilling Mystery With Friends!

As a crewmember, you're not just doing puzzles — you're trying to discover who the impostor is and eject them into the dark vacuum of space.

When you find a dead body, call an emergency meeting where you and your friends will argue over who they think is the impostor. Vote correctly, though! You don't want to send an innocent astronaut to their death. That's just what the impostor wants! Even if you're totally innocent, the impostor may convince your friends you're up to no good.

If the impostor lasts the whole round or kills all other crewmates, they win. If the crew discovers the murderer, then they survive to last another day on their space station.

With easy-to-learn gameplay and fun, cartoony graphics, Among Us by InnerSloth is great for players ages 9 and up. At its peak, Among Us had over 300 million active monthly players. This popularity and innovative gameplay won Among Us numerous awards including the Game Award for Best Mobile Game and the Golden Joysticks Breakthrough Award for 2020.

The best part is that you can download Among Us game free for Android, PC, iOS and multiple game consoles! Play via local Wi-Fi if you're hosting a late-night gaming session or join an online lobby for a truly random experience.

Whether you see yourself as a smart space station detective or a shadowy, imaginative impostor, download Among Us by InnerSloth for hours of intriguing fun with friends.

The Impostor will be given a false mission list in order to blend in with the crew. The Impostor can identify other Impostors and has the ability to disrupt the map system, traverse vents and kill the crew. If a player is killed by a Pretender, they will become a ghost. Ghosts have the ability to pass through walls, but can only continue to interact on the map in a limited way, and cannot be seen by any player other than the dead player who has become a ghost. All players except the ghost can only see for a limited distance. 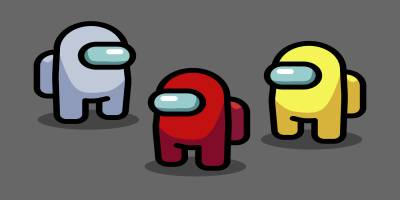