Developed by Niantic, Pokémon Go is a free augmented reality mobile game for all iOS and Android devices. The game was released in July 2016 and gained lots of affection, then became the hottest game right now. It is also the first great game within the Pokemon franchise to finally land on mobile phones.  Features It is an adventure where you'll need to go outside, move around and become a real Pokemon trainer. Any player who's ever played Ingress before will immediately know what you'll need to do and will quickly understand what the real idea is behind Pokemon GO. Those are not familiar with Ingress won't have too many issues either. The game turns your city into an enormous video game scene where you'll get to interact.  Thanks to the GPS on your phone, your avatar within the game will move along with you so that you can get outside and capture Pokemon. Are you near a beach or a river? It's an excellent idea to check out those areas specifically so that you can find a water Pokemon. Do you need a plant Pokemon for your collection? Then it's time to have a picnic.  Similarly, you can get new items when you visit the PokeStops, which are usually found at interesting places like art galleries, museums, and historical sites.  You can also buy pokeballs and restock here before facing off against a rival trainer. Pokemon GO is an excellent role-playing game to explore on mobile phones.  It's fabulous in every sense of the word. The game has an elegant interface as well as fantastic graphics. It is also well optimized.  But, the most important thing is that you can catch a ton of Pokemon.

Players need to capture Pokémon in the game world and train them. The map of the game world is the whole earth in the real world, and the base data is from the developer Niantic's previous work "Ingress", like "GO" can provide players with free props PokéStop and Dojo (Gym) is based on the location data of the portal (Portal) on the map of "Ingress". In addition in the game will provide different Pokémon for different areas, for example, in areas near water (lakes, shores, river banks), the probability of water-based Pokémon appearing will be higher than in other places. Player movement in the game is based on the player's location in the real world, for example, previously only in the canonical works of the hatching egg system also debuted in this work, players can use the egg hatcher after obtaining the Pokémon eggs, and to hatch the Pokémon eggs provided in "GO", the player needs to walk or move in reality to reach a certain distance before they can hatch successfully and get new Pokemon Pokémon. The dojo in the series also appears in this work, different teams of players will have battles in the dojo. 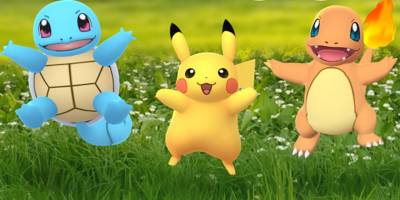 Get online and fight with other PokémonGO trainers!