Subway Surfers is a good casual puzzle mobile game released by Kiloo Games in October 2012. This game is more classic than Temple Run. The image of the game is beautiful, colorful and delicate, which makes people feel comfortable. It works smooth when playing this game. One boy acts as the hero who escapes from the police and his dog through simple upward, downward slide, left and right paddle to avoid obstacles and the oncoming train. This game is easy to operate and learn. You need to run as far as possible once you begin this game. Most fascinating part is, this game allows you play with your friends. The game is available on iOS, Android and Windows Phone platforms. props There are many different props for the game Subway Surfers. Today we will introduce you the props of Coin Magnet, Jet Pack, 2X Multiplier and Hoverboard. Coin Magnet: Players can collect all the gold coins in the valid time for the prop once you get the Coin Magnet. Jetpack: Players fly in the sky without coming across the train and obstackles in the valid time of the Jetpack. 2 x Multiplier: In the valid time of the prop, players can obtain twice the multiples of the original score once they collect a gold coin. Hoverboard: In the process of this game, players can get the hoverboard if they click twice on the screen and you will have two lives in the valid time of the hoverboard. Features Stylish Sprint: Players need to avoid the oncoming train.This game helps senior, skilled and inexperienced new players avoid grumpy inspector and the check of the bulldog. Decorating the train: You can enjoying surfing on the train and decorating the train with your friend to make it more interesting and vivid. Lightning fast speed: Challenge and help your teammate to join the most adventurous chasing game. You can enjoy the lightning fast speed in this game.

Subway parkour, players will be the identity of the child Jake to avoid the police and hounds, in the three tracks shuttle, the oncoming train will come. Players have to avoid obstacles and police at the same time, as much as possible to get gold coins. When the user gets a certain amount of coins, he can buy props and characters.

There are magnets, flying backpacks, double score, sneakers, skateboards and other props in Subway Runner, among which skateboards need to be activated by double-clicking on the screen and can be purchased in the store in different styles, single increase in coin multiplier and distance acceleration for single use, treasure chests can be obtained in the game or purchased in the store, and the rest of the props need to be obtained during the game and can be upgraded in the store in the game to extend the effective time.

Normal props: subway can be obtained, or can be upgraded in the store, or not. mystery props: limited to purple mystery (week limited) to obtain, stores, subway does not normally appear. Auxiliary props: used when starting to run. Special props: double-click the screen and can be called out.

Super Mystery Box (Super Mystery Box) can be obtained after completing a number of daily challenges in a row or by completing achievements (requires more than 30 times), open the box can get gold, single-use props, medals, characters, etc., but the award ceiling is higher than the treasure box. In the game, users can complete achievements (Missions) to get a higher multiplier score for each coin, up to 30x, and upgrade to the highest multiplier and still complete the achievement, you will get a super treasure chest. In the game, users can complete Daily Challenge every day to collect the letters that appear in the game and get gold rewards. Players who complete four Daily Challenges in a row, and then complete the challenge every day will receive a Super Treasure Chest 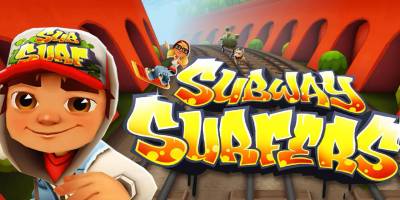 An introduction to Subway Runner

An introduction to Subway